Karma Is A Bitch (But Only If You Are) 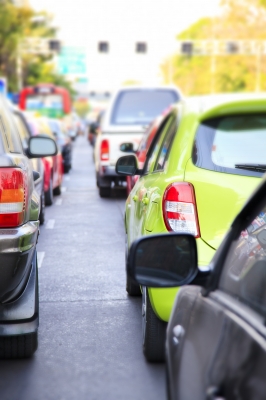 Well at least that’s what they say eh, that Karma is a bitch. I am a true believer of karma, what goes around comes around and it doesn’t always have to happen right away but in the end your actions will reflect back on you.

Today was a perfect example to me of how Karma can come back to bite you in the ass. Not necessarily to hurt one, but to hopefully a lesson learned. And I truly hope it taught a lesson today ;).

While driving up to work I ended up in a very slow moving traffic jam. It turned out a lorry (which people from the US would probably call a truck) had a tire blow-out on the motorway, swerved across the road to the left, hitting a light pole and ended back up on the right side of the road. They blocked one lane off so that’s what caused the traffic jam.

I noticed the arrow above the soon-to-be-closed lane and checked my rear-view mirrors to see if I could move over to the indicated lane. Luckily for me there was a big gap, then a Seat and behind that another lorry. The Seat left so much space it could probably have fitted two more cars in there, and as I was seeing his headlights in my rear-view mirror I indicated and moved to the left.

That’s when this lovely person driving the Seat decided to speed up and close the huge gap between him and where I was moving to. I don’t mean just closing the gap but nearly hitting the side of my car. The perfect gentleman behind the wheel (insert eye roll here) started making some seriously rude gestures to me and continued driving so he would get closer to my car, making me having to BACK UP, on the motorway no less!!!

Truth be told some seriously unkind words slipped from my mouth too, I would normally try to stay calm or calm down saying one of my favourite mantras but the dangerous situation I found myself in prompted me to swear and mutter under my breath.
To make a long story short; I backed up just a little to avoid a collision and and the wonderful lorry driver gave me some space to get in the lane anyway.

At first I doubted myself, had I not just misjudged space between his car and mine? But the lorry driver who was still shaking his head pretty much reassured me I didn’t do anything wrong. With the car now in front of me, I saw him leaving huge gaps again.

And that’s when Karma kicked in. A big lorry with trailer joined the queue and had to move into the same lane. He nicely indicated he was going to use the space in front of the Seat and moved over. Mr Seat driver hit his gas pedal, sped up and tried to run into the lorry as he tried to do with my car! He kept on moving, but so did the lorry, and the lorry won. The Seat had to move out of his way go off the road and onto the emergency lane.

The lorry driver made sure the Seat knew how he felt about all this, and even though the Seat ended up in front of the lorry anyway by the way he now quietly joined the queue instead of making a fuss I’m sure the message came across loud and clear (especially loud, since a lorry horn can be deafening).

And that my friends is what I consider Karma, or what goes around comes around. And it was well deserved too.

After the lorry pay back I felt so much better and my anger and disbelieve disappeared in an instand. The Universe will take care of things in her own unpredictable ways.

So remember, Karma is a bitch… but only if you are!

48 Hours of London, Friends and Music