The Hollow King #2 by Jessica Thorne

Like deep dark water, it pulls them down. The faint fire of magic within them flickers and dies. Their eyes turn black as night. They are nightborn now.

END_OF_DOCUMENT_TOKEN_TO_BE_REPLACED

Life for a 17 year old girl is hard enough, but it gets even harder when you’re to be the next Dragon Heir. Kaia, as the oldest child of the current Dragon Heir, inherited the power of flame to protect her homeland Okarria. In ancient times Odriel created three heirs. Ever since then the Dragon, Shadow and Time Heirs protected the land from a powerful necromancer and his undead army.

But peace has been around for so long, the necromancer has become a legend of old times. In present day there is no longer any need for the Heirs. And the Dragon Heir is feared by the people of Okarria.

END_OF_DOCUMENT_TOKEN_TO_BE_REPLACED

The Bride by Wendy Clarke

Growing up I’m sure we all had this one best friend, the person we always hung out with, spoke on the phone for hours with and we knew we could always rely on. Over the years those kind of friendships change and evolve, just like our lives do. Life might take us in different directions and we might have lost touch. But what if that person contacted you again ten years down the line?

Not unthinkable in this day and age with social media and the communication tools available.

END_OF_DOCUMENT_TOKEN_TO_BE_REPLACED

The Hollow King #1 by Jessica Thorne

“The room is small and dark. Row upon row of jars line the shelves, each one sealed with blood-red wax. The seal’s mark is a twisted circle of briar with gleaming, gold-tipped thorns. And in each jar a flicker of forbidden magic dances… beautiful, but deadly.”

END_OF_DOCUMENT_TOKEN_TO_BE_REPLACED

The Source of Magic #1 by Troy Clem

Transport yourself to ancient times. Back when the best mode of transportation were horse drawn carriages. When kings really ruled with iron fists and armies where called the Royal Guards.

That’s the setting our protagonist Theo finds himself in. He’s an orphan, a ward of the king of the Empire of Drasque. A curious twelve year old, he wants to know what the world outside the Rigol palace walls has to offer. When his carer Losik leaves for Ironhead he stows himself away in a trunk.

END_OF_DOCUMENT_TOKEN_TO_BE_REPLACED 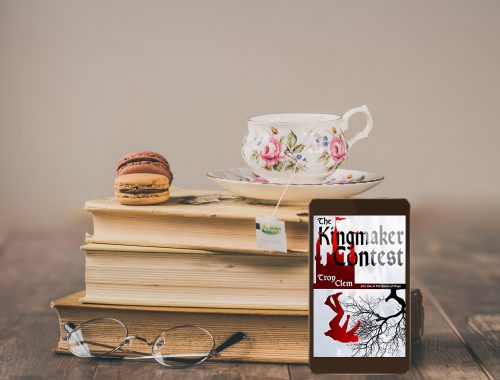